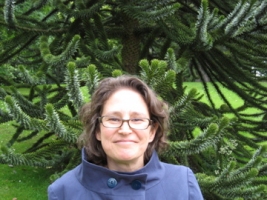 An unapologetic sculptor, Amy Hauft, grew up in Southern California. She earned a BA/Fine Art at the University of California Santa Cruz and a Masters in Fine Art/Sculpture from the School of the Art Institute of Chicago. She lived most of her adult life in New York City, followed by significant stints in Richmond, Virginia, Austin, Texas and now St Louis, Missouri.

Hauft creates architectural-scale installations, she builds haptic situations in which the viewer’s experience is equally palpable as physical and cognitive events. She has presented her work in museums and galleries world-wide including the Brooklyn Museum (NYC), the New Museum (NYC), the International Artists Museum (Poland), the American Academy in Rome (Italy) and PS1 Museum (NYC) among others. Her most recent project was on view for 2022 at MASS MoCA (North Adams MA).  She has been the recipient of significant grants including the New York Foundation for the Arts Fellowship, the PEW Foundation’s Philadelphia Exhibitions Initiative, the Howard Foundation Fellowship and a NYC Public Art Fund Grant. She has been awarded residencies to work internationally including the Civitella Ranieri Foundation Fellowship in Umbria, Italy and the International Artists Residency Fellowship in Lodz, Poland.

She taught for 14 years at the Tyler School of Art in Philadelphia where she moved from assistant to full professor. In 2004, Hauft was appointed Chair of the Sculpture Department at Virginia Commonwealth University, whose graduate sculpture program was ranked first in the nation by US News and World Report for her entire tenure. In 2012, Hauft was named the Leslie Waggener Professor in Sculpture in the University of Texas at Austin’s Department of Art + Art History where she ran the MFA in Studio Art program. In 2019 she was appointed Director of the College and Graduate School of Art in the Sam Fox School of Design & Visual Arts at Washington University and lives and works in St Louis.
Loading...